When Ancient Warriors were first released in Ignition Assault they were sadly dead on arrival. Despite being (for some odd reason) Beast-Warriors which have plenty of good support in the game, the Archetype was a little too straightforward for the Meta at the time. In its purest form, Ancient Warriors are basically a beat down deck, with the goal of using a combination of effects to remove your opponent’s Monsters from the field to reduce your opponent’s Life Points to zero using your larger Monsters. Since their release, the Archetype has received a few more pieces of support, including a pretty good Link-2 Monster, but sadly that hasn’t been enough to make Ancient Warriors viable…until now.

With the release of the Tri-Brigade Archetype, most Beast, Winged-Beast and Beast-Warrior decks have received an incredibly splash-able engine that is surprisingly powerful. And since Ancient Warriors are Beast-Warrior themselves, it was of course only a matter of time until the two Archetypes were combined and I am happy to say that the result is actually competitively viable. No, I’m not joking. I just said that Ancient Warriors are competitively viable. Tri-Brigade doesn’t exactly change what Ancient Warriors do and the deck does essentially remain a beat-down deck, however, it does help fix some of the original issues of the deck.

Before I get into the Tri-Brigade Ancient Warriors Deck profile itself and some of the combos, I’d like to go over the original holes of Ancient Warriors and how Tri-Brigade patches those up. First and foremost is how reliant on their normal summon they were. Monsters like Masterful Sun Mou and Virtuous Liu Xuan are needed in order to get the deck going. Should their normal summon be negated, or their effects negated, that is almost certainly the end of your turn. The Tri-Brigade Monsters can help mitigate this by making the deck less reliant on your normal summon, also being able to bait out any negates your Opponent may want to throw your way. Another issue that Ancient Warriors have is non-targeting removal. With boss Monsters like Red-Eyes Dark Dragoon being splashed into so many decks (Thanks Verte Anaconda), non-targeting removal is incredibly important. With Tri-Brigade you get easy access to such a form of removal through Tri-Brigade Shuraig the Ominous Omen which not only allows you to banish a card your opponent controls when he is summoned but whenever a Beast, Winged-Beast or Beast-Warrior Monster is summoned as well.

Brotherhood of the Fire Fist – Buffalo

Nibiru, the Primal Being x2

Brotherhood of the Fire Fist – Eagle

Apollousa, Bow of the Goddess

So, the deck is, if you haven’t been able to pick up on yet, is meant to go second. Hand Traps like Ash Blossom and Nibiru are great going second cards and D.D. Crow, while not only being useful in today’s meta, meshes really well with this deck since it is a Winged-Beast monster, and as such can be banished from the Graveyard for Tri-Brigade effects. Speaking of Tri-Brigade, let me explain what the engine does exactly. Three Fraktall is important since you want to see this card in your opening hand as much as possible. By sending it to the Graveyard, you are not only able to load your Graveyard for fodder to cheat out your Link monsters, but by the end of the optimal sequence (Fraktall -> Kitt -> Nervall -> Kerass) you will have a minimum of three targets in your Graveyard, four if you special summon Kerass using its effect. This can allow you to cheat anything out from Ferrijit (who can special summon a level 4 or lower Beast, Winged-Beast or Beast-Warrior from your hand to the field, but if you link her off you can also potentially fix your hand by drawing a card and placing a card onto the bottom of your deck), Rugal who can actually help you recycle your starter cards like Sun Mou, or Shuraig for easy removal, or even a copy of Double Dragon Lords should you be really desperate.

Your main starter cards for the deck are Sun Mou, which nets you a search during your Main Phase (which can lead to an instant Double Dragon Lords should you add Zhuge Kong since he special summons himself), and Liu Xuan if you are going second. Either of these normal summons are optimized with Three Visits, which adds an Ancient Warriors Monster from your Deck to your Hand when you summon an Ancient Warriors monster. A lot of the bigger monsters of the Archetype are able to special summon themselves under certain conditions that are fairly easy to fulfil, but of course, there is always the risk of bricking with these, so just…be careful. 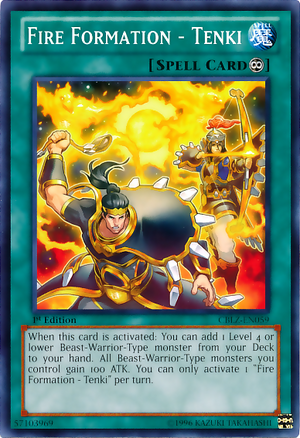 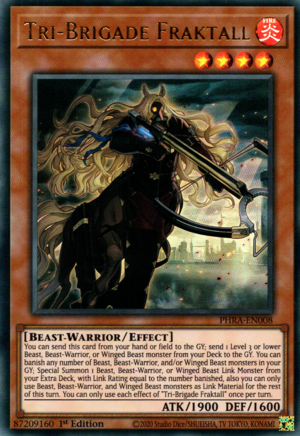 Opening hand for this combo is Fire Formation – Tenki and either Fraktall or Sun Mou plus any other monster you can discard off of Kerass. Now, this Combo is really cool because it works going first or second, with a slight difference in the end board depending on who goes first. Activate Tenki in order to add Fraktall or Sun Mou (Whoever you didn’t open up with). Activate Fraktall to send itself to the Graveyard, sending Kitt from your Deck to the Graveyard. Kitt then sends Nervall to the Graveyard, who will add Kerass from your Deck to your hand. Kerass special summons itself, then use it’s effect to cheat out Brotherhood of the Fire Fist – Eagle. Eagle will return Tenki to your hand (Possible re-use next turn) to send Buffalo from your Deck to the Graveyard. Buffalo special summons itself, allowing you to go for a Link 4 Monster. Going first, Apollousa is a great option, as you have three monster negates on board. For going second, you can easily opt for Accesscode Talker for removal and a powerful 4300 body on the field. Once you’ve done that, normal summon Sun Mou and use his effect to search for Zhuge Kong. He will special summon himself from your hand, giving you the Link Materials needed for Double Dragon Lords. Lords gets a search on summon, and in this case, we’ll add Rebellious Lu Feng, who can easily special summon himself from the hand. So your end board should look like either Apollousa or Accesscode Talker, Ancient Warriors Oath – Double Dragon Lords and Ancient Warriors – Rebellious Lu Feng.

Now, this is a really simple to pull off two-card combo that can end in a really devastating board, especially going second. The combo, in it’s purest form, is swarming the field by activating Three Visits and normal summon Sun Mou. Visits will add Zhuge Kong and much like with the previous combo, he will summon himself this way. Now, if you have Zhang De in your hand, you now have the required parameters to summon him to the field, giving you another body. You can then use Sun Mou to send Three Visits to the Graveyard for your search, and then Three Visits will special summon whatever Ancient Warriors monster you added to your hand. However, if you have another Ancient Warriors monster other than Zhang De in your hand, you can instead add him and use Visits to summon whichever other monster you had. From here use Sun Mou and Zhuge Kong to make Double Dragon Lords and add Rebellious Lu Feng to hand. From here special summon Lu Feng. Your end board should look something like this: Double Dragon Lords, Zhang De, Lu Feng, and any other Ancient Warriors monster from the combo.

This next combo shows that the deck can function even if you don’t open up any Level 4 Ancient Warriors Monsters. If you open Fraktall and Three Visits plus any discard fodder, you still have a decent board to show for it. First activate Three Visits, then use Fraktall to do the Kitt -> Nervall -> Kerass play. From there, special summon Kerass and use its effect to cheat out Double Dragon Lords. Now this will activate Three Visits, allowing you to add Sun Mou from your Deck to your hand. From here you can normal summon Sun Mou and use his effect to send Three Visits to the Graveyard in order to add Zhuge Kong. Now, if you had another higher level Ancient Warriors monster in your hand, you also get an extra special summon, but we are going to work off the premise here that you did not. Now, use Kerass and Double Dragon Lords to make Tri-Brigade Rugal the Silver Sheller, who on your Opponent’s turn can special summon a Beast, Beast-Warrior or Winged-Beast monster from your Graveyard, adding it back to your hand during the end phase (This is a great way to re-use cards like Sun Mou). Now from here, you should Link away Sun Mou and Zhuge Kong to make a second Double Dragon Lords who will net you an additional search. From here, add a monster that can special summon itself to your field, like Rebellious Lu Feng. So with this opening hand, your end board should look like Rugal the Silver Sheller, Double Dragon Lords, and Rebellious Lu Feng.

I’ve been taking this version of Tri-Brigade Ancient Warriors for a spin for a little while now and honestly, this is a really fun and potent deck that I could see being a sleeper pick. People automatically underestimate Ancient Warriors simply because of what they are, and as a result, can be easily blindsided but just how good the boards this can produce are. Of course, this probably isn’t a perfect version and I only leave this here as a way for you to get started. Change the Decklist up, add your own spicy techs, make the deck even better than this! If you’re looking for something a little different than a board filled with omni negates that doesn’t let your opponent play, then I highly suggest trying Tri-Brigade Ancient Warriors out. You won’t be disappointed.

yugioh legacy of the duelist tournament

the duel of fate